Thought I'd share my latest little project.
Having successfully run a natural sunlight frag tank a few years ago, I've opted to go this route again for a full display tank. The tank is positioned in an area which receives direct sunlight for approx 3-4 hours. For the balance of the day, no direct sunlight falls on the tank but the ambient light levels are high ( 15 000 Lux which equates to approx 300 PAR). This will take a bit of experimentation to see how the corals react, and whether I would need to provide additional shielding for the DT to prevent bleaching.

Reinforced the stand a bit, as I had concerns about the overall stability and strength of the square tubing

Final positioning of the stand and tank ( Leak test has been completed, and all good

).
LR is cycling and I will add the rest of the LR from my Nano once I transfer the livestock over to the larger tank.

Still lots of work to do in getting the plumbing , electrics and wiring of my controller sorted.
I'll update again in the next few days once this is completed.
Apollo's Natural Sunlight Reef

Looks good.
See you lifted the stand overall by a couple of centimetres.
The cycle is only complete when the dead has been eaten

RiaanP said:
Looks good.
See you lifted the stand overall by a couple of centimetres.
Click to expand...

Yes, I wanted a little more height primarily for practical reasons.
The existing stand was a little low and it would have been difficult placing the skimmer in the sump. The Reef Octo NW110 is quite high, and I didn't feel like battling to get the skimmer cup out every time I needed to clean it.

Finally finished the plumbing and most of the electrics. Still need to tidy up the wires a bit.
My Reef controller will be wired in as soon as I break down my Nano.

And then.... Murphy came calling : Two of the tubes on my RO unit split lenghtwise, which has halted the filling process.

So this morning it's off to get the tubing replaced and hopefully I can get the tank filled by tonight.

Next step will be to get the aquascaping done. Since I have LR which has already cycled, I'll have to do the scaping with the tank filled which is going to be interesting.
Will update again once this is done.

On a more interesting note : The effect which natural sunlight has had on the LR is fantastic.
Below is a pic of coralline growth on an otherwise "dead" piece of LR over the past two weeks.

your wires outside looks better than my wire mess on my display....

The cycle is only complete when the dead has been eaten

RiaanP said:
your wires outside looks better than my wire mess on my display....

He he ..... Don't think your wire mess is that bad. I've seen worse.
Besides for the neatness aspect, I need to get the wiring sorted to ensure no water ingress occurs where I have jointed cables, or even where water runs down the drip loops. Hence the reason for the trunking to keep everything dry .... hopefully
Apollo's Natural Sunlight Reef

Is there a wall or something that's still to be built?

viper357 said:
Is there a wall or something that's still to be built?
Click to expand...

The tank is positioned outside on my semi-enclosed patio (see pics below - Excuse the uncut grass. Must get to this today

). With the current summer sun, the tank is lit directly for 3-4 hours a day. For the rest of the day, the sunlight does not fall directly on the tank, but the light levels are high due to reflection. Don't have a PAR meter, but I've used a calibrated lux meter and did an approximate conversion to PAR. Light levels in the early afternoon are still in excess of 300 PAR.
Strangely, I will probably have more direct sun for most of the day during winter, due to the angle of the sun and positioning of the patio.

Ah, I get it now, thanks, looks great.

Very nice build
Dont see any mention of whats going in the tank? With all that sunlight, you have to at least add some SPS?
David’s Tank

459b said:
Very nice build
Dont see any mention of whats going in the tank? With all that sunlight, you have to at least add some SPS?
Click to expand...

The intent with the NSL system is a full SPS reef. I'm not much for softies, so besides for my Blasto and some Zoa's which will be transferred from my Nano in a few weeks, everything else will be Acros, Mille's, Pocci's and Stylophora's.

Tank filling is complete. Just sorting out my biopellet reactor and then all is well.
Apollo's Natural Sunlight Reef

I'm rather pleased sofar with the progress.
Next challenge will be to complete the scaping tomorrow.
Apollo's Natural Sunlight Reef

Spent most of yesterday fine tuning the skimmer and fixing a multitude of small leaks in the plumbing.
Didn't get round to doing the aquascaping as yet, so I've just dumped the LR in the display tank for now.
My thoughts with the scaping is to do two separate islands : One island for Acro, Pocci, Mille's , Stylophora's with a cave for some Sun corals. The second island will house mainly tabling Acro's Plating Monti's and encrusting Monti's ( Perhaps some Undata as well) with a bottom flat section for some Favia's & Blasto's.

Just to share with you some pics taken this morning as the sun was rising :

So this is what the setup looks like at present. As mentioned, I still need to do the aquascaping and will hopefully get to that later today

The sump is now completed, although I am already thinking that the sump is too small. Really battled cramming in the skimmer and pellet reactor and hopefully the reactor positioning is OK. ( Would have preferred to plumb the reactor outlet directly into the skimmer, but perhaps I'll get to this later). Also came to the realisation that I have way too little LR. Will be needing at least another 8-9kg of well seeded LR urgently, and will see if I can get hold of some today or tomorrow. 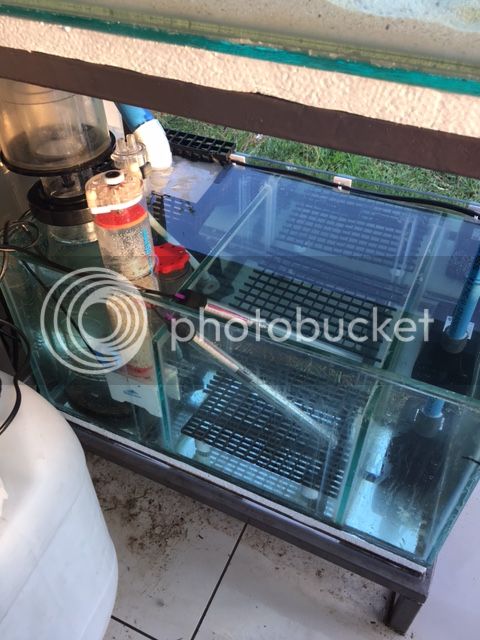 Even my little Favia frag is doing much better under natural sunlight, and is for the first time in weeks extended feeder tentacles at night.

So that's the story thusfar. Will update again when the aquascaping is finished.
My coral shipment from Vietnam is arriving today, and I have been really looking forward to this.
I am a little anxious, since these are wild colonies which are coming in from Vietnam, so hopefully they land well.
Last edited: 17 Dec 2015
Apollo's Natural Sunlight Reef